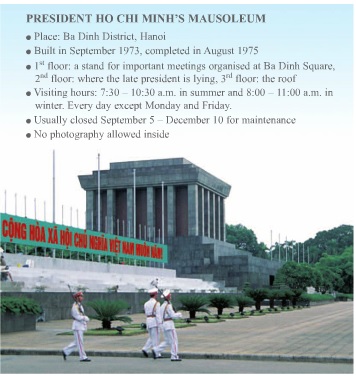 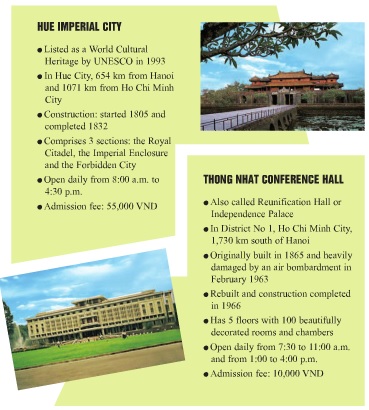 I'd like to introduce you all some features about Hue Imperial City. Hue is in the central of Vietnam. It is 654 km far from Hanoi and 1,071 km from Ho Chi Minh City, and you can also get there by plane, about 45 minutes from Tan Son Nhat Airport.
Hue was listed as a World Cultural Heritage by UNESCO in 1993. Hue was founded by the Nguyen Dynasty. The construction started in 1805 and completed in 1832. Hue comprises three sections: the Royal Citadel, the Imperial Enclosure and the Forbidden City.
The City is open daily from 8:00 a.m to 4:30 p.m. and the admission fee is 55.000 VND per person.

I'd like to introduce you the Thong Nhat Conference Hall. It is located in District 1, Ho Chi Minh City. The Hall was originally built in 1865 by the French to be the resident of the French governor. Then it was called the Presidential Palace, later the Independence Palace (Dinh Độc lập). In February 1963, the building was heavily damaged by an air bombardment. And it was rebuilt and the reconstruction completed in 1966. After 1975, the building was called the Reunification Hall or the Thong Nhat Conference Hall. It has five floors with 100 beautifully decorated rooms and chambers.
The Hall is open daily from 7:30 to 11:00 a.m. and from 1:00 to 4:00 p.m. The admission fee is 10.000 VND per person.

Da Chong historical place is located in Ba Vi district, on Da river. It is far about 70 km to the west of Hanoi. This place was built in 1958 and completed in 1960. Then it was recognised a historical place in 1975. The construction comprises 2 houses. The 1st house is a stand for important meetings of political ministry. The 2nd house is the place where the late president was lying from 1969 to 1975. Da Chong historical place opens every day of the week except Monday from 8:00 to 11 a.m and from 1:30 to 4:00 p.m. Visitors can come and see it freely.